Cartography is the science of map-making, and a kind of cartography - or surveying - is an important skill in Miasmata.

The key to this skill is triangulation, and this will be explained below.

Most man-made objects around the islands can be used as landmarks in cartography.

In terms of your map, a landmark might be either "known" or "unknown". It's considered "known" if its exact position has been calculated by triangulation, is visible on the player's map, or is shown in one of the maps the player finds in huts and tents .

All map-making is done with the player's map brought up - press M to do this.

WIth the map up, move the mouse around the landscape and onto landmarks such as tents, pillars, statues, ruins, and other man-made structures. You'll see one of these mouse cursor symbols over the landmarks:

Normally, you'll only see the first two unless you're actually plotting positions.

Finding your Position and Triangulation: The 1-2-3 Quick Version[]

Note: Each time you complete step #1, a large circle is revealed around you. If the circle reveals the unknown landmark on your map, it is now known, thus not requiring steps #2 and #3.

Note #3: The head-shaped statues in the ocean surrounding the island, along with the ones on high mountains, are the most beneficial landmarks to have "known", because they are typically the easiest to re-plot (step #1) when plotting unknown landmarks.

Here's a scene in which there are both known and unknown landmarks: 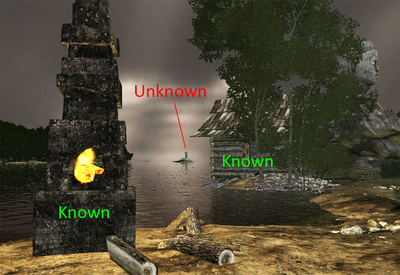 To make it easy to show, I've used landmarks that are close together on the screen.

First, we need to find our own exact position on the map. We can do that by finding the angles to the known objects: the beacon on the left and the hut on the right.

We now move the mouse over the beacon ... 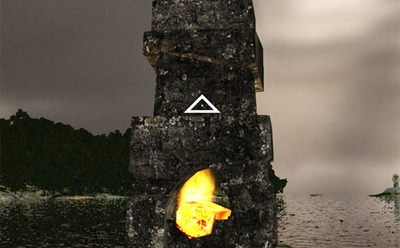 ... and click. A line will be drawn on the map from the beacon, at the angle your compass shows (so it passes through your position): 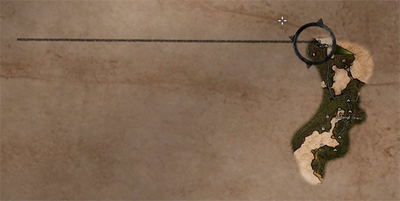 Now we do the same thing for the hut on the right: 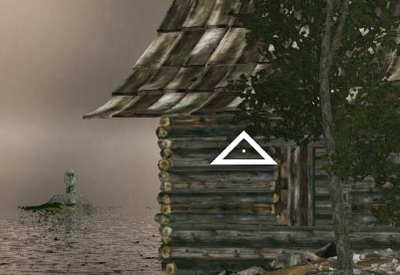 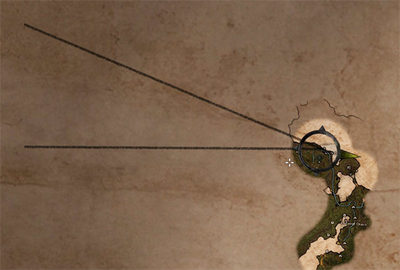 Where the two lines cross is our position, in the centre of the ring: 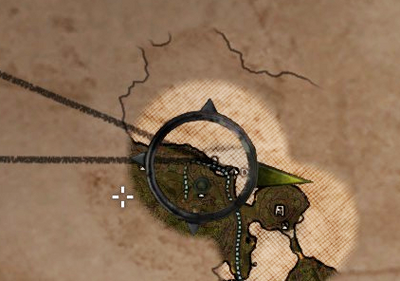 The green arrow points in the direction we are facing.

We now know exactly where we are on the map.

It's a good idea to find the positions of any other landmarks you can see.

Once we've triangulated our position, we do not put the map away before plotting a line to any unknown landmarks we can see. Here, we will find the position of the head statue in the distance, which is currently unknown.

Before we knew our position, the statue showed on the screen like this when we had the map up: 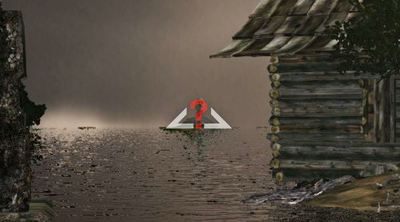 The red ? symbol shows that it's an unknown landmark.

But now we know our exact position, it shows like this: 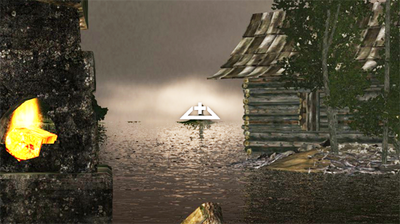 The white + symbol shows that we can now plot its direction. We click to add it to the map, and a line is drawn. Now the head shows the red question mark again, because without a second plot the exact position is known. That's because we don't know how far away from our position the status is.

So we need to move to a different spot, so we're looking at the statue from another angle:

The known landmarks are along the coast at the right, near where we were standing before. We can still see the head statue in the distance, and now it's time to draw a second line to that statue and so find its exact position.

First, we plot our current exact position as before, using whatever two known landmarks we can see:

and again, draw a line to the distant head statue ... 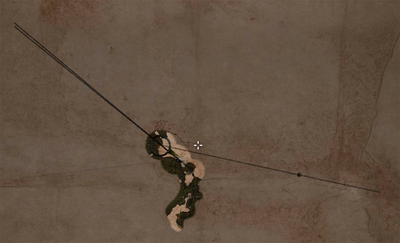 Now we the head status has become a known landmark, and we can use it to plot our position as we move away from the place we started at.

By doing this wherever we go, we reduce the chance of getting lost.

Cartography table. These only serve to give you the mapping documents A and B.