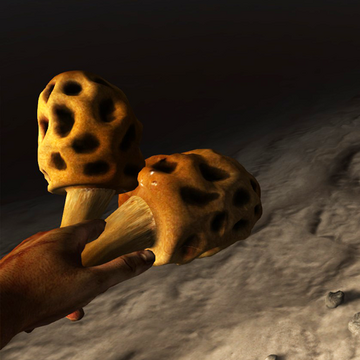 "An asocarp: a fungus belonging to the genus Morchella. It's fruiting body is epigeous and consists of numerous pits and ridges, resembling a sponge.

This fungus can be found several places scattered across Eden, it prefers dry pine forests above water. The easiest location is in one of the first Map Pieces normally found.  This one can be tricky for new explorers.  Get onto the south coast of the Northeastern Peninsula.  Now travel along it until you find the hut north of the prominent headstone across the bay.  Go inland northwards and slightly west until you find the urn, the cache is on the hill just north and there is more scattered to the east close by.

If you're scrabbling around the large point (the southernmost part of the peninsula to the east), you're in the wrong position. Start again from the southern hut and veer west, not east.

The largest cache can be found on the southernmost tip of the island, south-east of Outpost Sirius and south of Outpost Rigel at the southeastern-most tent.

You can find also near Ruin Site B in Western Peninsula.

A natural antidote to counteract type-C poison, This plant may be used along with Trumpet Mushroom to synthesise the brain emphasis drug .